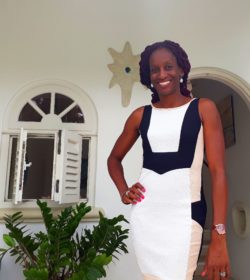 by Karen Rollins for Yello

In 2008, at the start of the global recession, she left her job as a marketing, operations, and sales manager in the tourism industry, to follow her passion for property.

Since then Cherita has become a familiar face on the local real estate scene and has established a reputation for innovation and honesty as well as a ‘no nonsense’ approach.

When COVID-19 began to have a growing impact in the Caribbean in March, Cherita was worried, but her concerns were primarily centred on her own, and her family’s wellbeing, rather than her business.

“The first week of the lockdown was uncomfortable because people didn’t know what to expect and there was a general feeling of heightened anxiety,” Cherita states.

“I think I just went into survival mode. But to be honest, the last thing I was thinking about was work. My hope was more that Barbados wouldn’t be impacted too severely.

“As it went on, I knew the whole world was in trouble because the pandemic brought everything to a standstill. It was like God pressed the pause button. But I didn’t fuss because everyone was impacted.”

Barbados had its first two confirmed cases of the illness on 17 March and went into lockdown soon after with all essential business halted.

Obviously, house and land viewings were not possible, and any contracts or exchanges would have to wait until the situation improved. However, Cherita’s real estate business is more focused on house and land sales, which she believes put her in a better position than most to weather the storm.

She adds: “I’m accustomed to irregular cash flows because I mainly deal with sales. If I sell a property today, I might not get to see the money from that deal for five to eight months. And, if there are some issues it can take even longer.

“So, as a realtor you learn to budget your life very carefully and develop good saving habits because you don’t know when the next sale is coming.

“I also had deals started before COVID-19, and they were going to carry on once it was done. I only had one deal which fell through.”

Cherita says the pandemic gave her the opportunity to have some downtime which she says she rarely gets because she is self-employed. But she also reached out to clients and took the chance to concentrate on building customer relationships via social media.

She explains: “I come from a marketing background and I know that when things are down you need to be seen even more. The pandemic isn’t going to last forever so as a businessperson you need to make sure your customers remember you.

“I put together interactive educational events and took part in other entrepreneurs’ online events to debunk some myths, and help the public learn more about the real estate industry.

“I also called clients and just chatted about how they were doing and didn’t bring up the property at all. My strategy was to keep connecting and to show a human side while the crisis was going on.”

Barbados’ real estate industry is back up and running again now but with certain restrictions. Agents and clients are advised to wear masks, maintain social distancing, and use hand sanitiser.

Cherita has gone the extra mile by making sure prospective buyers do not spend more than 10 minutes in the house they are viewing. She also stays outside while they look around and reminds them not to touch anything if possible.

She adds: “If I’m showing a house that’s occupied, I will make sure the owner is completely comfortable by explaining all the steps I plan to take.

“The idea is to give the viewers a quick look and feel for the property. If they’re interested, we can come back for longer when the restrictions have been lifted.

“Both sets of clients are quite understanding because everyone knows we are not in regular times.”

Cherita says she had multiple viewings the first week she reopened for business, and hasn’t noticed any significant drop off in interest in residential sales, beyond what would normally be expected at this time of year.

However, she believes the commercial rental industry on the island has been hit “pretty hard”.

She says: “I have a colleague with a commercial building where three different clients gave notice.

“Some clients also want to downsize from bigger spaces to smaller offices and some people have realised that they can get work done from home and don’t need office space at all anymore.”

But, Cherita says she is still “highly optimistic” because Barbados has come through the crisis relatively well with less than 100 cases, and will always be a desirable destination, especially for foreign investment.

Although, she thinks the full impact of the crisis on the housing market may not be fully known for another five or six months.

Cherita states: “I honestly believe that after the banking moratorium ends and the NIS benefits period stops, then it might get harder.

“If people are not rehired or employed by new companies, and the tourism industry doesn’t recover, that’s when you’re going to see a peak of properties coming onto the market for sale or people defaulting on rent and mortgages.

“People will also become more desperate to sell. Vendors are going to be less likely to heckle and just work with the buyer who’s in front of them.

“We all kind of know that it’s not business as usual. So, the focus this year is just on surviving financially and keeping the pedals turning. No-one expects profitability so you just want to keep your business running.”